THE HISTORY OF THE POMERANIAN
by Cathy Driggers & Kelly D. Reimschiissel

With more coat than body, Pomeranians have quite an interesting history behind them.
The Pomeranian, as we know it today, descended originally from the Spitz family of dogs in the frozen Arctic region of Iceland. These Spitz dogs were much larger than the modern Pom as evidenced by their primary purpose of herding, pulling sleds, and guarding. In Italy they were used to watch over their owner’s items. The Pomeranians would alert their owner of someone coming or attempting to steal their valuables.
Spitz breeds mean a type of dog that has several wolf- like characteristics. For instance, small ears to help reduce the risk of frostbite. The insulating undercoat that is denser than the guard hairs to trap the warmth and protect them from the heat. 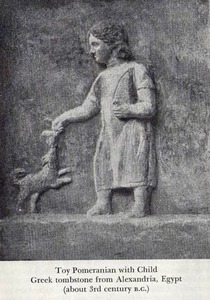 At some point in time, the Spitz was transported into Europe, most commonly along the southern coast of the Baltic Sea. This particular Baltic region was called Pomerania, which now includes parts of present day Poland and Germany, and is where the Pomeranian name came from. Pommore or Pommern means “on the sea.”

Canine historians also believe that this is the location that the breed was first downsized to about 30-40 lbs. 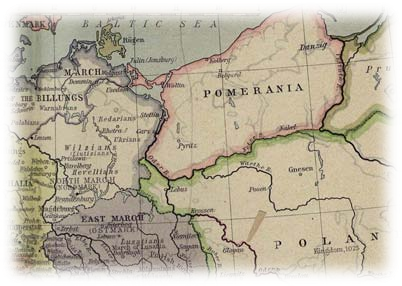 More specifically Pomeranians are part of the German Spitzen group, a subgroup of the Spitz type, which is comprised of five different sizes of dogs. FCI and German historians consider the German Spitz to be the oldest breed of dog in Central Europe from which other breeds have been produced. This theory is substantiated by archaeological discoveries in Switzerland and throughout Germany. Pomeranians are the group’s smallest members.Prior to securing the breed name of Pomeranian, they were called by several other names. Fox Dog, Lulu, Pommer, Wolfsspitz German Spitz, Volpino and Spitz Dog. 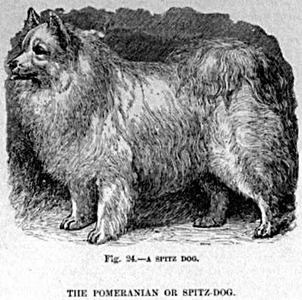 An interesting fact – Germany did not accept the breed to be named Pomeranians until 1974. All 5 sizes were generically called the German Spitz.
So many times, references are made about these “new” parti-colored or white Pomeranians. The original Pomeranians were white, black, brown and parti-colored. The red and orange colors were quite rare at that time.
Many people don’t realize that some of the first recorded pictures and paintings of the Pomeranian dog are of white and parti colored Pomeranians. Many of the paintings and prints from the 18th century feature Pomeranians of various color and size. The Prince of Wales had a black and white parti Pomeranian, named Fino that was painted in 1791. 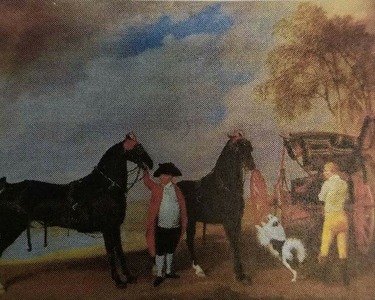 James Boswell and “Pomer” are the first known recorded reference in British Literature to the Pomeranian breed. Mainz and Manheim November 2, 1764. "The Frenchman had a Pomeranian dog named Pomer whom he was mighty fond of. 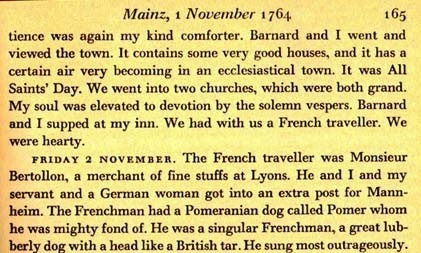 Queen Charlotte influenced the evolution of the breed when she brought two Pomeranians to England in 1767. Named Phebe and Mercury, the dogs were depicted in paintings by Sir Thomas Gainsborough. These paintings depicted a dog larger than the modern breed, reportedly weighing as much as 30–50 pounds (14–23 kg), but showing modern traits such as the heavy coat, ears and a tail curled over the back.
In 1873 the Kennel Club (England) was formed and the so-called Spitz dog was among the first breeds recognized. The first Poms shown at the time weighed nearly 18 pounds. 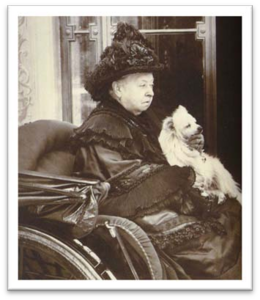 In 1888 a Pomeranian named “Marco” was sent from Florence, Italy to become the beloved companion of Queen Victoria of England. Marco weighed 12 pounds. The Queen also imported a 7.5 pound, white female named Gena. The Queen’s love of the breed was clear to everyone who saw her with her dogs. Because the Queen was a popular monarch, the breed’s popularity grew as well. In fact, the Queen is credited for encouraging the trend toward the smaller Poms. At one
time, Queen Victoria had 35 Pomeranians in her kennel, and on her deathbed, asked for her Pomeranian Turi to be at her side.
Early American History
Pomeranians were shown in the United States in the Miscellaneous Class as far back as 1892. Regular classification was not provided until 1900 at New York. In 1900 the American Kennel Club recognized the Pomeranian and the American Pomeranian Club (APC) was formed. In 1909 APC was accepted as a Member Club of the AKC and became the designated Parent Club for the breed. The APC held their first specialty show in 1911 with an entry of 262 Pomeranians.The first Best of Breed winner was Ch.Banner Prince Charming 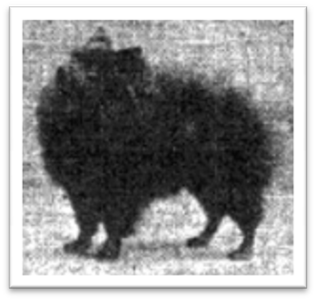 Early American winners were finer in bone, larger in ear and usually weighed under six pounds. They had type and good coat texture, although they lacked the profuseness of coat in evidence today.

When the Titanic sailed on its maiden voyage, there were three breeds of dog that survived the sinking of the Titanic on April 14, 1912. Two were Pomeranians. As Margaret stood waiting and holding her Pomeranian, James Clinch Smith passed by and jokingly commented, "Oh, I suppose we ought to put a life preserve on the little doggie, too." Margaret Hayes survived with her Pom on lifeboat #7. A Pomeranian belonging to the Rothschild’s survived, possibly because it was bundled into Mrs. Rothschild’s bag, although Mr. Rothschild went down with the ship.
It is interesting to note that Pomeranian type has stayed fairly consistent from the early 1900’s to the Pomeranian’s you see in the ring today.

As companion dogs, Poms make excellent friends and have rubbed shoulders with some of history's greatest creative minds. Mozart dedicated one of his finished arias to his pet Pomeranian, Pimperl. Frédéric Chopin, inspired by his friend’s pet Pomeranian chasing his tail, wrote the song “Waltz of the Little Dogs.” When Michelangelo was painting the Sistine Chapel, his Pom was sitting below on a satin pillow watching the action.

While this Nordic breed has sled dogs, watch dogs and herding dogs behind them, they have been bred for many years for simple companionship. You will find that many Pomeranians today still carry many of the same traits as the breeds behind them.

This little compact toy dog does not realize that it is such a small dog. Pomeranians are truly large dogs in a small dog body. They have a vivacious spirit with a foxlike expression.

They are playful throughout the majority of their lives, but are also happy to simply hang out on the couch or in your lap. Their territorial nature will alert you to any unusual disturbance or intruders to your household. Pomeranians are very loyal to their people. They have a strong desire to please, but can remain stubborn should they see fit. They have been successful in obedience, rally, agility and many other events. Their social nature among themselves makes it easy and interesting to own more than just one.